Posted on April 17, 2015 by Rabbi Nico Socolovsky Leave a comment

Yeshayahu Leibowitz explains that the reason to couple the Torah portions of Tazri’a and Metzora (Leviticus 12:1-15:33) in the Jewish communal reading of the Torah is that they both deal with biology of Man, with the biological filth of human existence. A central element in both portions is impurity. 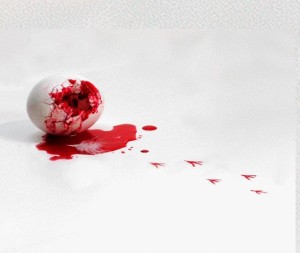 A woman who gave birth is considered impure for a period of about 40 to 80 days (as calculated in the Talmud). Following this period, the woman is asked to go to the Temple and make an offering. The combination of these two ideas is somewhat irritating for modern women and men. Impurity of birth? Making an offering?

For generations up until today, females’ menstruation has been used as a tool of oppression. Around the subject of impurity and the treatment of females in the Torah there is a deep and painful debate.  But what I’d like to examine is the issue of impurity as it relates to the cycle of life, and what other meanings it might have.

An interesting example to approach the idea I’d like to propose is the Naizirite (Numbers 6) – a man who worships God by denying himself of things like growing his hair, eating certain foods, drinking wine, etc. In order to terminate the period of Nazirism, the Nazirite must make an offering. Why? The Nazirite arrives at a very high spiritual level, an unusual closeness to God. The termination of this period is in a way going ‘down a step’, getting farther away from a place very full of God’s presence. At this transition one makes an offering.

Thousands of years forwards, think of the nearly incomprehensible “magic” of the airplane rising up to the sky. What we all understand is the landing part; the idea of slowing down. There would be no safe landing without the landing strip, the space needed to stop the huge machine coming at hundreds of miles per hour.

Birth-giving is perhaps the most magical event in life, in which we are privileged to be involved in a Godly act. The boundaries between the human and the divine are blurred. Perhaps all the pain and the blood that accompany this are a reminder or our being human, and of our physical limitations. With this in mind, the impurity that accompanies birth-giving is similar to the Nazirite’s going “down the step”. Returning to the landing airplane, following her “flight” the woman needs a “landing strip” to touch ground again. The impurity period is, for her, this landing strip. It is the space, the time, the respect that a person who was part of Creation deserves.

In Judaism life means the presence of God in a place. In Kabbalah God is thought of as a sea, and souls are droplets whose origin is that sea. When a human being ceases to exist physically, his droplet goes back to its origin. In our approach, what makes Man alive is the existence of the soul within him. This is why in the morning we bless “… As long as the soul is within me, I give thanks before You”.

My first-born will be 4 soon. My presence at his birth gave me more than excitement; I watched his first breath, or in slightly more spiritual language – I felt his soul settling down in his body. At that moment I understood how big the miracle was, how stunning the magic of creation.

The idea of the “landing strip” also applies to the baby, who needs a few days to settle down in this world before he or she is named. Only on the 8th day is the coupling between the body and the soul finalized, and we enter our child to the Brith (covenant) of Abraham.  Rabbi Samson Raphael Hirsch explains that the circumcision can be seen as a second birth event. We do not only celebrate the arrival of the child in the world and the connection between the “impure” body and the pure soul; we also, and mainly, mark the divine presence that will accompany his body for the rest of his life.

Another expression of impurity is where there used to be life and now it is gone.

Six years ago my mother passed away. I had the privilege to accompany her in her last minute and to be present in her last breath.

I remember my two sisters and myself standing alone in the hospital room waiting for my father to arrive; that is, the three of us and my mother’s body. It took about two and a half more hours until the body was taken away.

My mom died young, at 58. She was a very pretty woman. For the last month and a half she was hospitalized and the situation didn’t allow chemotherapy to be performed. Her hair therefore had time to grow again, and she never even had wrinkles.

If you looked at her, it was impossible to believe that she was dead. Her face was full of peace, so young, so ironically healthy-looking…

I hugged and I kissed the “impurity”.  According to the Jewish law there is nothing more impure than a dead body. But I knew I was never again going to be able to touch my mother’s cheeks. I rested my head on her, I rubbed my cheek in hers.

Impurity and knowing that there is impurity, is therefore a tool which allows us to re-connect to the world following an incomparable spiritual arousal, to welcome our kids in this world, and to say good-bye to those who are dear to us. We couldn’t have lived without the impurity. Sometimes we wrongly think that it is a goal in our life to keep “purity”, but in this way we miss an essential part of our existence.